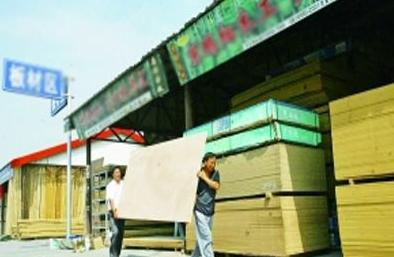 As people's awareness of environmental protection has increased, the environmental protection standards for home improvement boards have become higher and higher. However, in the market, some businesses say that their products are national standard E1, and some say that they have reached E0 level, in addition to F4 star, CARB certification, and so on, it is dazzling. What is the meaning of these plate standards? Which is the most environmentally friendly? Recently, the reporter visited some stores and experts to answer readers' questions.

GB only E1, E2 level "We are the domestic E1 level, European E0 level." Recently, in a store in Chaoyang District, a certain brand of wooden door sales told reporters that the wood door sub-solid wood, solid wood composite, plywood doors and so on. As wooden doors, floor-to-ceiling cabinets, tables, chairs and other wooden furniture belong to the artificial board and its products, they are all applicable to GB18580-2001 "The formaldehyde release limit of interior decoration materials in artificial boards and their products".

The first two types of formaldehyde emission are divided into E1 and E2 grades. E1 grade can be used directly in the room, and E2 grade must be finished before being allowed to be used indoors. According to the different inspection methods, the formaldehyde limit values â€‹â€‹and units of the two types are also different. Among them, the first type of E1 limit value is â‰¤9mg/100g, E2â‰¤30mg/100g. The second category is E1 â‰¤ 1.5 mg/L and E2 â‰¤ 5 mg/L. The third category is only E1, that is â‰¤ 1.5mg/L.

"Our domestic standards lag behind Europe. In Europe, there is E0, and formaldehyde emission is â‰¤0.5mg/L," said the salesman.

A survey by the reporter found that although the national standard does not have an E0 level, many businesses have played the E0 flag. From building materials to furniture, there is no shortage of brand names. Because the lower the formaldehyde content, the higher the raw material, production technology, and processing technology requirements of the company, it is often only the best in the industry.

Level E0 is for enterprises to set illegal standards. However, the reporters found relevant information and found that even in Europe, the official standards do not have the so-called E0 level. According to Song Guangsheng, director of the China Interior Decoration Association and Indoor Environment Monitoring Working Committee, the so-called E0 level is often a kind of hype and is a corporate standard set by some manufacturers to improve product quality. Most of them have set formaldehyde emission levels â‰¤ 0.5 mg/L as E0, but they cannot be set in Europe. The E0-level sign posted by some local manufacturers is also a self-developed class, and there is no formal institution certification.

Not only that, there are also many cases in which merchants were sentenced to pay compensation due to the promotion of the E0 standard and environmental protection has not yet reached the standard. A cabinet manufacturer in Nanjing claiming to use â€œE0 cabinet base materialâ€ was sentenced by the court to pay consumers 15,000 yuan for failing to obtain a valid and valid E0 sheet inspection report.

The national standard of formaldehyde is not scientifically graded. However, the reason why all businesses compete to promote E0 level, with the national standard lags behind the environmental protection needs of consumers are inseparable. Wang Zhengri, deputy director of the Institute of Wood Industry of the Chinese Academy of Forestry, said that although GB18580-2001 stipulates the concentration of wood-based panels released, it does not stipulate total indoor control. In other words, only the unit's release control does not use artificial The total amount of board control, when the amount of artificial board reaches a certain degree, the cumulative amount of formaldehyde will exceed the standard. "Obviously speaking, the current national standard has become the umbrella for the legal excess of formaldehyde. This has also caused many consumers and manufacturers to lose all their lawsuits. The company is profit-making, as long as I meet the national standards, you will Can not say that I exceeded the standard, as the use of the total amount of formaldehyde exceeded the scope of the company is not illegal. From another point of view, wrong is not in the enterprise, but in the national standard formulation issues."

Wang Zheng said that in Japanese standards, F1, F2, and F3 correspond to China's E2, E1, and the company's own E0. F1 grade products are not allowed to be used indoors. F2 grades and F3 grades are allowed to be used indoors, but the total amount of use is strictly controlled. If F4 grade (â‰¤0.3 mg/L) is reached, it is not limited by the total amount of use because This product is very safe.

Relevant standards will be upgraded With the scandals such as the Anxin floor last year, the formaldehyde standard limit for wood-based panels and their products has been put on the agenda. In May of this year, the National Standardization Management Committee revealed that it intends to revise the above-mentioned national standard. In the revised draft, the E2 standard will be deleted. Once the draft is passed, the formaldehyde emission limit value of building materials in the future will be no more than 1.5 mg/L.

In the same month, Tao Yiming, secretary-general of the China Wood and Wood Products Circulation Association, also stated at the â€œ2013 China Wood-based Panel Industry Development Summit Forumâ€ that the project was approved by the Ministry of Commerce and approved by the China Wood and Wood Products Circulation Association. "is about to come out. This standard mainly regulates the definition of green wood-based panels, production raw materials and process requirements, product quality and safety performance requirements, inspection methods, etc. It will be connected with the green standards of the foreign wood-based panel industry, such as the US CARB certification and Japan's JAS certification. The standard will prompt the industry to gradually become a green industry based on green standards and provide consumers with genuine green products.

The JAS method is a Japanese Agricultural Standard formulated by the Ministry of Agriculture, Forestry, and Fisheries of Japan, and all organic products and raw materials exported to Japan must comply with this standard. Only JAS certified products and ingredients can be sold in the Japanese market. Some domestic building materials or furniture manufacturers will promote their own environmental protection to reach the F4 star. This is the highest level of environmental protection for building materials in Japan's current laws and is considered to be the most healthy international standard.

Guolian New Material specially produces electrolytic tinplates. It covers full range of tinplate products, which include Tinplate Coil , Tinplate Sheet , Tinplate Series, Tin Free Steel , Laminated Steel, Printed Tinplate. These tinplates both have industrial grade and food grade. It`s not only for industrial cans but also for food & beverage cans. At the meantime our tinplates is applied widely in communications industry like cable covering layer. Hence our tinplates series have been received great popularity in many markets abroad.