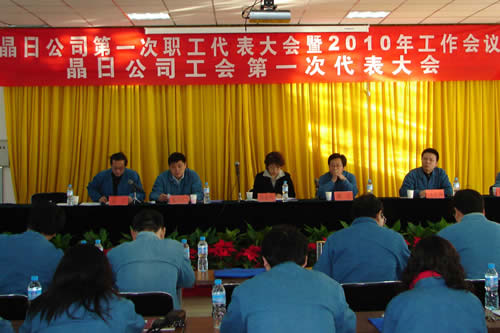 On January 29th, Jingri Company held the first employee representative conference and 2010 work conference, and held the first congress of the Jingri company union. Han Shumei, vice chairman of the General Administration of Trade Unions, attended the meeting and delivered a speech.

At the first employee congress and 2010 work conference, Jiang Jie, deputy general manager of the company first conveyed the spirit of the second session of the General Secretary and the 2010 work conference, and comprehensively studied the work of the director of the General Administration and party secretary Yan Xueyi. Report; General Manager Cui Xiangren gave a work report titled â€œConsolidating the Solid Work and Striving for the Better and Faster Development of the Companyâ€. The report focuses on market development, scientific and technological progress, lean production, and enhanced strategic execution. The work in 2010 was deployed; the chief accountant Wang Yanqing made a report on â€œJingri Company's 2010 Budget Arrangement and 2010-2012 Three-Year Development Planâ€; finally, the company's Chairman Dai Zhiyi â€œstrives spirit, strengthens confidence, and is solid. The work was carried out to speed up the development of the company.

The delegates discussed the work report of the general manager and the meeting documents, and the representatives of each representative group made their speeches. The meeting passed relevant resolutions and signed various responsibility books for 2010.