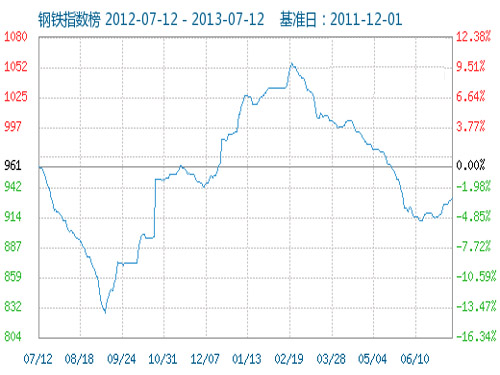 Rebar: Even after 22 days of strong market sales, since the beginning of late June, the rebar market has seen a big wave of rally, which has risen for 22 days, and has risen more than 100 yuan per ton, an increase of 3.74%. According to the business community price monitoring, as of July 12, the average price of the 16mm tertiary rebar market was 3,337.14 yuan per ton, which was an increase of 0.45% from July 8.

From the business community's current time chart, the settlement price of the main contract of ** has risen to varying degrees in early June since the one-month decline from the beginning of May, and after several days of price correction. , June 26 began to be affected by the spot price increase, there has been a substantial increase in prices, and in early July reached a peak, return to the price level in early May **. According to the business club price monitoring, as of July 11th, the period of the main contract settlement price of the screw was 3,659 yuan per ton, up 224 yuan per ton from June 26, an increase of 6.52%, a continuous rise of 16 days, and ** The increase was greater than the spot increase.

Iron ore - steel billets - steel industry chain: the overall upward trend of the industry The iron ore market has started to rise for 16 days since June 27th. According to the business agency price monitoring, as of July 12, the average price of 62 printed ports was 871 yuan per ton, up 5.58% from June 27. Billet prices also began to rise in prices in late June. According to the price monitoring of business clubs, as of July 12, the average billet price of Tangshan's carbon billet was 3030 yuan per ton, up 3.06% from June 27. The steel market also witnessed different degrees of gains. According to the price report of business organizations, the 27th week (7.8-7.12) of commodity prices in August 2013 saw a total of 12 categories of goods with a month-on-month rise in the iron and steel sector, and the top 3 products were seamless (1.87%) and medium-thick. Board (0.94%), hot rolled coil (0.86%). Only one kind of goods with a decrease in the chain ratio is galvanized sheet (-0.37%). This week's average increase or decrease is 0.51%.

This rally is the first large-scale, wide-ranging rally in the recent four-month decline. The main reason is that the social inventory of steel products has been lower than the same period of last year after falling for 16 weeks. (As of July 5, the five major steel society stocks in major cities nationwide were 164.99 million tons, 411,200 tons less than the previous week, and the decline was more than all the expansion). Steel mill stocks have also declined. According to data from the China Steel Association, the statistics of iron and steel enterprises in late June mainly accounted for 12.769 million tons at the end of the year, a decrease of 874,000 tons from the end of last year. The shortage of some varieties of specifications, coupled with the rising prices of raw materials such as billets and imported iron ore, has given some support to steel prices. According to business agency inventory monitoring, as of July 11, Tangshan billet stocks have continued to decline to 552,800 tons, a decrease of 63,900 tons from the previous period, a decrease of 1,423,100 tons from the stage high of 1,975.9 tons in mid-March, but individual companies recently There was even a phenomenon of picking up goods, which pushed up the price of billets.

Therefore, there are many favorable factors in the overall steel market, and steel prices have a greater incentive to rise.

The fundamentals of unstable fundamentals in the macro market are limited. Currently, the fundamentals of the steel market are not yet solid, especially in the industrial sector, which faces the pressure of deflation. The major steel industries such as automobiles and home appliances are in the off-season, while the output of crude steel in June has not decreased but increased. The contradiction between supply and demand has intensified In addition, Chinaâ€™s foreign trade exports gradually declined, and the growth rate of foreign trade in June dropped by 2%, with the exception of the unfavorable economic conditions of major economies outside the United States and weak demand. As the lower reaches of the steel industry, exports of mechanical and electrical products in the first half of the year increased by 10.7%, and the growth rate fell by 3.5% from January to May. In June, the import and export volume of steel products both fell in a month-on-month ratio, and the trade friction in the steel industry is still increasing.

Therefore, in the end, He Hangsheng, an analyst at the business club's steel division, believes that in the short term, steel prices are still rising, but the increase is limited. The first half of next week or continue to rise, and then there will be a callback market. The market price is relatively flexible. At present, it does not have the conditions for a complete reversal, but the space for decline has also been limited and has not yet been opened. It is recommended to pay attention to the reduction of production and maintenance of steel mills. It is expected that the steel market will maintain its volatility in July and August as a whole.

Stainless Steel Washer Metal Washer are short spacers, usually round in shape, either drilled through or with a threaded hole. Some washers are produced with features that inhibit spinning/loosening, such as split washers, or toothed washers, and others are made of bent or beveled material that act as springs. Washers can be used to provide spacing between parts, allow a wider contact area when fastening with screws, provide thermal or electrical isolation, inhibit loosening, or provide a small degree of spring pressure.

Dream washers are available in a variety of materials, like stainless steel, steel, copper and so on. Our manufacturing processes can hold tighter tolerances than the industry standard and allow for the fastest turnaround of parts as needed. Part lengths can be modified to suit any customer requirement.